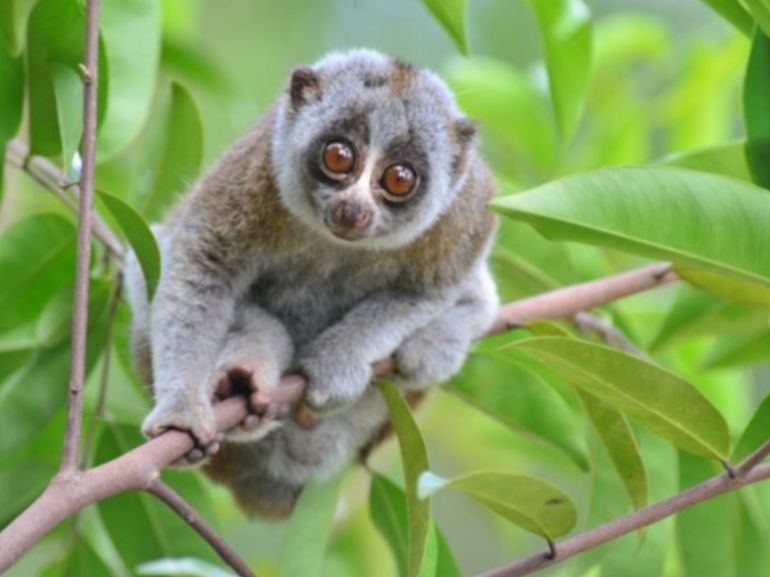 The Bornean Slow Loris is a species of slow loris native to central South Borneo in Indonesia. Formerly considered a subspecies of the Philippine slow loris, it was promoted to a new species in 2013 when a study of museum specimens and photographs identified distinct facial markings.

Like other slow lorises, this arboreal and nocturnal species primarily feeds on insects, tree gum, nectar, and fruit; it also possesses a toxic bite, a unique feature among primates.

In terms of appearance, the Bornean slow loris has a vestigial tail, a round head, and short ears.  It also has a rhinarium (the moist, naked surface around the nostrils of the nose), and a broad, flat face with large eyes. An important characteristic of this and all other Bornean species is that they lack a second upper incisor, which distinguishes them from other slow lorises.

This species is another animal greatly suffering from habitat loss as one-third of Borneo’s forests have been cut down from 1987 to 2012. Also, the Bornean slow loris, along with other slow lorises, are popular goods in illegal wildlife trade, with loris parts commonly sold in traditional medicine and viral videos on YouTube promoting the exotic pet trade. It seems like Appendix I of CITES that should protect slow lorises from commercial trade is not enough to protect the species from people’s greed.