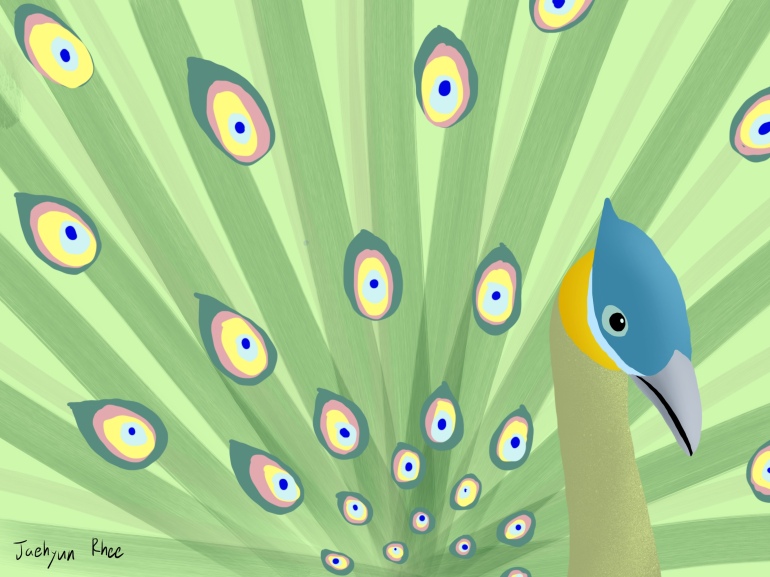 The green peafowl is a species of peafowl that is found in the tropical forests of Southeast Asia. Unlike many other peafowl species(including the related Indian peafowl), the two sexes of this species have a similar appearance. That is, the peahen looks just as flamboyant as the peacock.

The neck and breast feathers of both sexes are iridescent green and resemble scales. Both sexes also have long upper tail coverts that cover the actual tail underneath. In the male, this extends up to two meters and is decorated with eyespots or ocelli while in the female the coverts are green and much shorter, just covering the tail.

Green peafowls are large forest birds that spend time on or near the ground in tall grasses and sedges. Ticks and termites, flower petals, buds leaves, and berries are favorite foods of adult peafowl.

Due to hunting, habitat loss,  and poaching, however, the green peafowl is considered to be endangered. The world population has declined rapidly and the species no longer cover a wide area of distribution. The last strongholds for the species are in protected areas such as Huai Kha Khaeng Wildlife Sanctuary in Thailand, Cat Tien National Park in Vietnam and Baluran National Park, and Ujung Kulon National Park in Java, Indonesia.

To restore them to their previously abundant state, we have to pay more attention to the biodiversity within our environment and be aware of the consequences of our everyday actions.