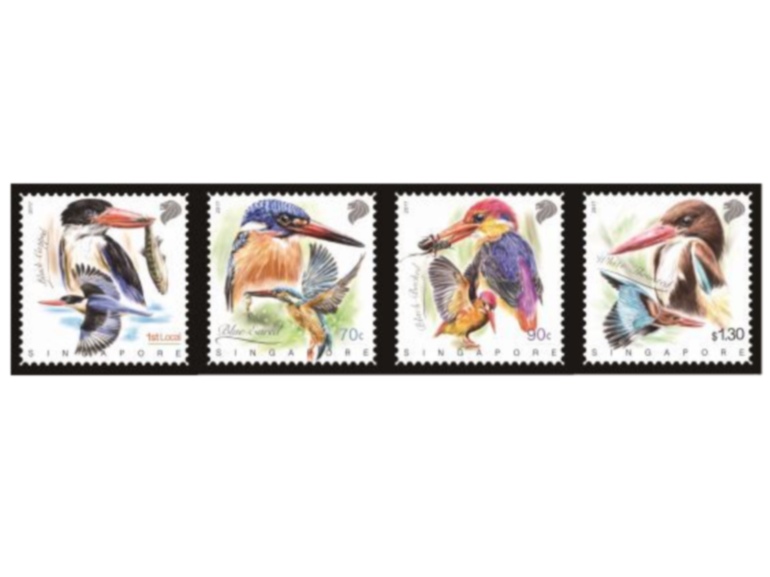 The Black-capped Kingfisher (Halcyon pileata) is a medium-sized bird that is distributed widely across Asia, from East India to China, and Southeast Asia. It is typically found in coastal and mangrove habitats, where it feeds mostly on fish, frogs and crabs. Its crown and the sides of its head are black, with a thick red bill, while its collar, throat and upper-breast are white. The upperside of its body is deep blue, and its wings are largely black.

The Blue-eared Kingfisher (Alcedo meninting) is one of the smallest kingfishers that are native to Singapore. It is found commonly on the Indian subcontinent and in Southeast Asia. They make their homes mainly in dense shaded forests, feeding on fish, crustaceans, and insects in small forest streams. It has a deep blue back, while its underside is a deep orange. Adult males have a dark coloured bill while females have a reddish lower mandible.

The Black-backed Kingfisher (Ceyx erithaca) is endemic across much of the Indian subcontinent and Southeast Asia. At 14 centimetres in length, it is the smallest of the eight kingfisher species found in Singapore. Also known as the Oriental Dwarf Kingfisher, it lives in densely shaded forests, preying on fish, crustaceans, frogs, insects and spiders. It has an orange crown, with a blue-black patch behind its eyes, and a yellow underside.

The White-throated Kingfisher (Halcyon smyrnensis) is a large kingfisher that can be found from Turkey to the Philippines. It is one of the most common kingfishers in Singapore. It feeds mainly on rats, lizards, frogs, snakes, small birds, crustaceans, large insects – less on fish. It has a bright blue back, wings and tail, while its head, shoulders, sides and lower belly are chestnut.