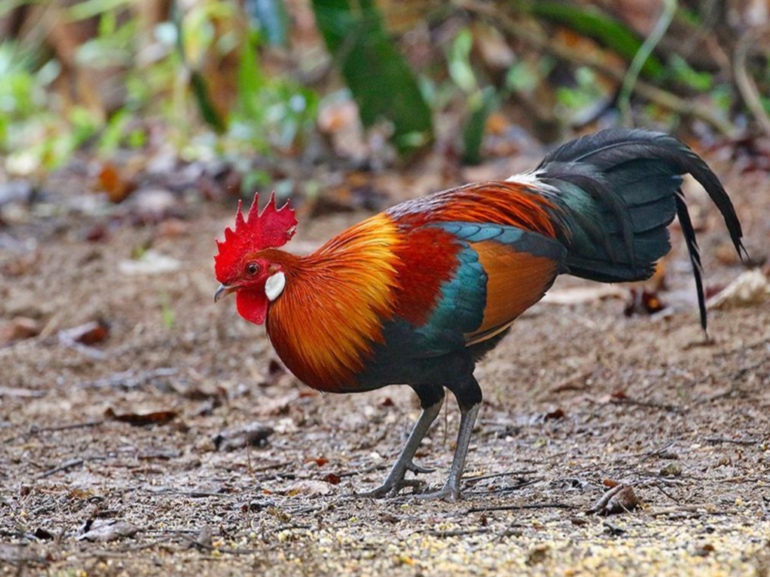 The Red Junglefowl is found from the western Himalayas to Southern China, and throughout Southeast Asia. In Singapore, it is a threatened animal, and is on the ‘Endangered’ list in the Red Data Book. True wild populations have been recorded in Pulau Ubin since the 1980s, and in the Western Catchment since 2000.  The population in Pulau Ubin is seen to be more viable.

Why is the Red Junglefowl endangered? One reason is the loss of its habitats: scrub, secondary forest, and mangroves. Many have fallen prey to unscrupulous poachers due to the bird’s ground-dwelling habit. The Red Junglefowl population numbers are also further affected when the birds interbreed with domestic chickens.

Though the Red Junglefowl resembles domestic chickens physically, it is considerably bigger at 43 – 80 cm in length. The male has white facial lappets and a distinguishing white patch on the upper base of the tail, and a red comb on its head. Even his call is similar to the domestic male’s “cock-a-doodle-do”, but with the last note ending abruptly. The male and female both have grey legs and feet.

At Pulau Ubin, NParks has been conducting surveys to estimate and monitor the population since 2005. Each survey sees staff and volunteers setting off to six sectors on the island at the same time, to record sightings and calls of the Red Junglefowl. For consistency in data collection, the surveys are repeated three times, at the same locations and at the same time of the day.

The three surveys conducted since 2005 have shown that the Red Junglefowl population has remained fairly consistent over the last four years. This is good news indeed for our fine, feathered friends of this endangered species – they remain protected in this habitat, where they can breed and thrive.