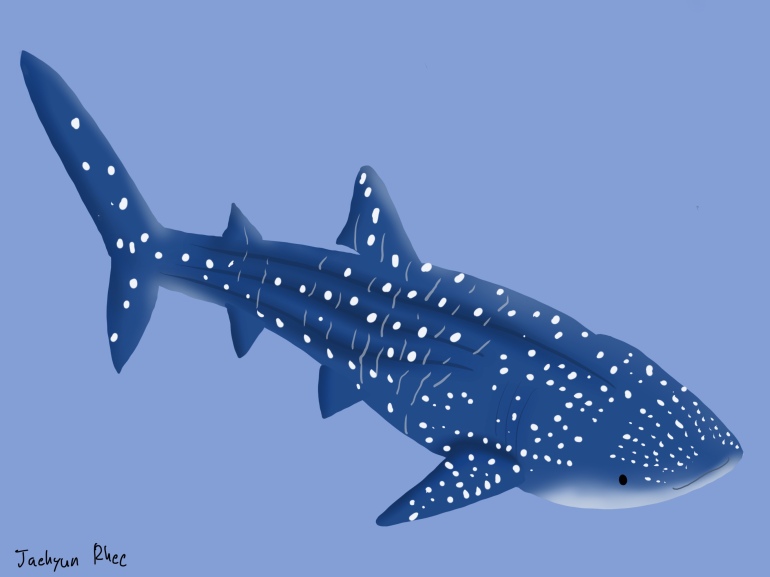 Recently, I have watched a program that advertised eco-tourism with people swimming along whale sharks in Mexico and the Philippines. The program introduced eco-tourism as a way of protecting the species as well as boosting the local economy. Although I don’t have enough knowledge to state whether or not that eco-tourism is going to work out as claimed, I do hope that such efforts can bring more attention to the endangered whale sharks.

The whale shark is the largest living nonmammalian vertebrate on the planet and the only extant member of the family Rhincodontidae. In contrast to its common name, the whale shark, this species only feed on planktons and are known to pose no threat to humans. The whale shark inhabits the warm, open waters in tropical oceans and lives up to 70 years in the wild.

Because of its iconic status, the whale shark is popular in the few public aquariums that house it, but its large size means that a very large tank is required and it has specialized feeding requirements. Their large size and iconic status have also fuelled an opposition to keeping the species in captivity, especially after the early death of some whale sharks in captivity. Outside Asia, the first and so far only place to keep whale sharks is Georgia Aquarium in Atlanta, United States. This is unusual because of the comparatively long transport time and complex logistics required to bring the sharks to the aquarium, ranging between 28 and 36 hours. Georgia keeps four whale sharks: two females, Alice and Trixie, that arrived in 2006, and two males, Taroko and Yushan, that arrived in 2007.